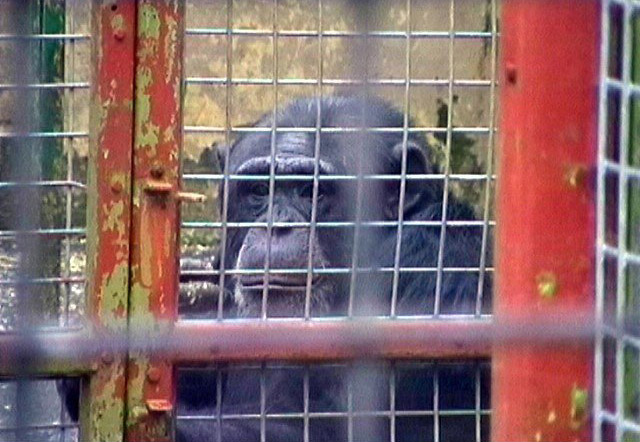 (Image from Freedom for Animals)

Tens of thousands of animals are held captive and exploited in zoos in the UK alone. Many of these animals are captured from the wild: 70% of elephants in European zoos and 79% of all animals in UK aquariums were caught in the wild. Animals typically die prematurely in captivity. African elephants in the wild live more than three times as long as those kept in zoos. 40% of lion cubs born in zoos die before one month of age. Creatures that would naturally roam over a huge area, such as lions, tigers and polar bears, are confined in cramped conditions. Birds are physically mutilated to prevent them from being able to fly. Even at safari parks animals are often locked up in their sleeping quarters for 18 hours a day. With insufficient exercise, elephants commonly become overweight and lame. The effect that captivity can have on animals’ health often manifests in the form of repetitive acts or ‘stereotypic behaviour’, recognised by scientists as a clear indicator of severe animal welfare issues. It is common to see animals pacing back and forth or rocking, signs of their mental distress and boredom. The practice of putting animals on anti-depressants is surprisingly common. Animals in zoos often suffer from neglect and become sick, sometimes being left untreated. At South Lakes Safari Zoo in Cumbria, nearly 500 animals were documented as dying in a three year period from exposure, emaciation, poisoning, drowning, electrocution and hypothermia, some were even run over! Yet the local authorities allowed it to remain open despite all this for a long time, before it eventually refused to renew the zoo’s license. However the zoo was able to stay open while it appealed this decision and now continues to operate under ‘new’ management, which consists of many key members of the old management team.

Whilst zoos try to justify the captivity of animals by claiming it is for conservation purposes, in reality the vast majority of the animals they have are not endangered species and are bred purely for entertainment. Very few are returned to their natural environment and of those that are, their period in captivity does not help them adapt to living in the wild. Most zoos have had no contact of any kind with any reintroduction program. Far from being kept alive for conservation purposes, healthy animals are regularly killed (‘culled’) when they are deemed surplus to requirements. At Longleat Safari Park, lion cubs were killed after the zoo admitted they bred too many, to make sure there were always cute babies for the public to see. A giraffe at Copenhagen Zoo was killed because he didn’t have the right genes for breeding. The same zoo later killed four healthy lions to make room for a new one they wanted to breed. The European Association of Zoos and Aquaria said in 2007 that member zoos were being actively encouraged to kill unwanted animals, including tigers, if other zoos did not want them. It said that such animals take up space and keeper time. Tierpark Neumünster zoo in Northern Germany said when their income decreased during the Coronavirus pandemic, if necessary they would sacrifice some of the animals in their care by feeding them to others. They even decided in advance which of their 700 animals, some of which are endangered species, would live or die, based on their ability to be exploited, promising their polar bear would be at the top of the food chain, simply because he is their greatest attraction. Zoos spend millions on keeping animals confined, while natural habitats are destroyed and animals killed as there is insufficient funding for protection.

UK zoos have been exposed as having links to animal circuses, supplying them with lion cubs; in fact some zoos themselves train the animals they hold to perform unnatural tricks for the public, for example sea lions and elephants. They do not do such things willingly and are often cruelly mistreated as they are trained to do so. Many zoos also hold after-hours events to make more money, often featuring loud music, drunken revellers and fireworks.

Zoos claim to offer education, however, seeing animals held in artificial environments devoid of their natural context does nothing to educate visitors about the species in the wild. Frequently, zoo visitors learn little more than how an animal behaves in captivity and leave with a distorted and inaccurate perception of the species concerned. Most animals in zoos are unable to live in the way that they would naturally and some may even be on medication to alter their behaviour. In general, the priority for zoos is providing entertainment rather than education. Today, with informative nature documentaries, online educational tools and the increasing affordability of international travel, we have the opportunity to learn about animals by viewing them in their natural habitat. The invention of the zoo dates back to an era when people who looked different were also put on display.

In many countries, regulation of animal welfare in zoos is poor or even non-existent. Cities are not the natural habitat of wild animals, and they sometimes escape before being shot dead by police. In 2015, a flood in Georgia destroyed enclosures at the Tbilisi Zoo and saw dozens of zoo animals unleashed on the streets, including lions, bears, wolves and a hippo. In 2018 a Eurasian lynx named Lilith escaped Borth Wild Animal Kingdom in Wales and was shot dead by order of the local authority. In 2002, flooding in Prague Zoo led to an elephant and hippopotamus being euthanised to ‘save’ them from drowning. In 2007 a kangaroo was hit by a train that runs through the Cleveland Zoo. In 2015 dozens of animals including lions, tigers, monkeys and crocodiles died from hunger or thirst at the Khan Younis Zoo in the Gaza Strip when they were left without care during the Palestinian and Israeli conflict.

Positively however Costa Rica declared in 2013 that it would be closing all its zoos and releasing the animals who could be rehabilitated into the wild.

No New Zoo in Cheshire

A mobile zoo named Zoo2U has submitted an application to Cheshire East Council to build a NEW zoo and ‘wildlife conservation park’. Claiming they have ‘outgrown’ their existing property, the company have big plans to build the new zoo on Twemlow Lane near Holmes Chapel. Read more

Merseyside Animal Rights supports Freedom For Animals’ annual Zoo Awareness Weekend, which is held over the Easter Bank Holiday weekend to highlight the plight of animals held in zoos. In recent years MAR has organised actions at Chester Zoo and Turbary Woods Bird of Prey Centre near Preston.